This morning we were really hit with the laziness that comes with being in a comfortable place. We hung around the hotel until around 10 am, at which point Björn and I went our separate ways. He had decided to take the roads in order to avoid the snow like we had on Mt. Etna while I decided to stick to the SI (Sentier Italia) trail, which meant I had longer to hike. Because the E1 still isn’t defined in this part of Italy, we had been following the SI but really have the freedom to take whatever path we wish. We decided to meet in Fabrizia at the Starlight Bakery Café, where I saw that they stayed open later than places usually do in smaller Italian communities. We knew that it would take me longer to get there, so Björn said he’d wait for me there.

Starting in Gubarie at around 1300 meters high, I hit the snowy trail to begin climbing up to Montalto, the highest peak in Aspromonte National Park, at 1956 meters. The snow was packed early on, which made for pretty nice hiking despite the climb. That didn’t last too long though, as I soon hit softer snow that caused me to post-hole my way along, slowing my progress greatly. Things weren’t too bad when the incline was gradual, but there were a couple steep sections where I had to clamber up, gaining ground and losing just a bit less. What usually makes for wonderful hiking in good weather, going along a steep ridge on a single path trail, makes for something harder to call ‘hiking’ in the deep snow. I felt like a gorilla as I used both my hands and feet to shuffle sideways along the incline. Kicking my foot in the snow to gain a hold, then crossing my other foot in front of it to do the same, while punching into the snow with my hands. It was pretty fun but definitely slow and exhausting, especially with a heavy backpack. There was one time where I started sliding down on the surface of the snow and had to kick in to stop myself.

Then I transitioned from a challenge due to lack of human impact straight into one directly caused by people. The trail led me across – and straight up – an active ski slope. This didn’t make the employees happy, but I did get some cheers from skiers as I climbed the steepest section yet. While the slope itself was obviously packed down well, I didn’t want to intrude and put myself or anyone else in danger, so I walked just outside of the barrier, which of course was made up of deep, soft snow. Occasionally the barrier ended and I got some relief by walking on the very edge of the packed snow. Looking at the map on my phone, I was apparently on trail. Eventually someone skied down and tried to tell me I couldn’t be there. I was near where the trail cut back into the woods, so I explained to him what I was doing and pointed to the trail sign up ahead. I would soon be out of his hair. He spoke to someone on his walkie-talkie and gave me the ok. He watched me turn and I pointed to the trail marker as I did. It kind of blew my mind that a trail like this was entirely unknown to the people skiing right past, and even to the people who worked there. They probably don’t have many hikers during the winter, so that makes sense I guess.

I got back to some pleasant hiking without significant post-holing, and I even followed wolf tracks for an hour or two! There were several pairs of tracks, one of them being significantly larger than the others. They were heading in the direction I came from. I remember reading in a map/pamphlet that they gave me at our hotel in Reggio Calabria (The Pelicano Guest House. They were so hospitable and kind there!) that there were some packs of wolves here in the park. They stuck right to the trail for a long time! When I follow tracks like this in the snow I wonder if the animals are aware they’re walking on an established trail. Do they choose that path because it’s worn and easier, or have the people who made the trail just done a nice job of following the natural contours of the land, so much so that it’s the natural path the animals take? I can’t help wondering these things after a season of trail work!

The sun began to set and I hadn’t even reached Montalto yet. I was dreading where I would set up my tent. It would obviously have to be in the snow, seeing as everything was covered, and that would likely mean a pretty uncomfortable and sleepless night. I don’t exactly have the gear to camp comfortably in winter. My sleeping bag is pretty warm, but the down inside of it has clumped up in places, leaving certain parts unfilled. I haven’t been able to remedy this yet. This makes me cold at certain places on my body and has definitely cost me some sleep on this trip. Lucky for me, I found an old abandoned building around two kilometers or so before the peak! I couldn’t believe it! It was concrete, didn’t have any doors or windows, and had snow covering most of the inside, but it was a shelter gosh dangit! I saw signs of human activity there, and even some of animals. I had to set up my tent in a bit of snow, but it wasn’t too bad. What was pretty rough was that my shoelaces were frozen. This made it hard to undo them. I struggled with them for a bit with my hands that were rapidly losing feeling, and then I used my knife to pry the laces loose. I left my boots outside the tent with the microspikes that I hadn’t used much and I brought everything else inside with me.

I was able to warm up for the most part, but didn’t get the greatest sleep. The wind was strong outside, and I was somewhat protected, but I kept hearing something that seemed like more than just the rubbing of my rainfly. I could tell that something was poking around near my tent. My first thought was a wolf, but the creature seemed smaller. It didn’t make much noise, but I started to calmly talk to it and it reacted. I said things like “Hey, I know you probably just want some food, but can you please leave me alone. I’m just trying to get some sleep.” It became obvious that it wasn’t just my rainfly, and it even poked my tent, but it wasn’t aggressive so I stayed calm. I was annoyed that it came back several times throughout the night, but my growing sleepiness and awareness that it wasn’t dangerous made me care less and less. I didn’t sleep much but I was happy to have my shelter and my quiet solitude. 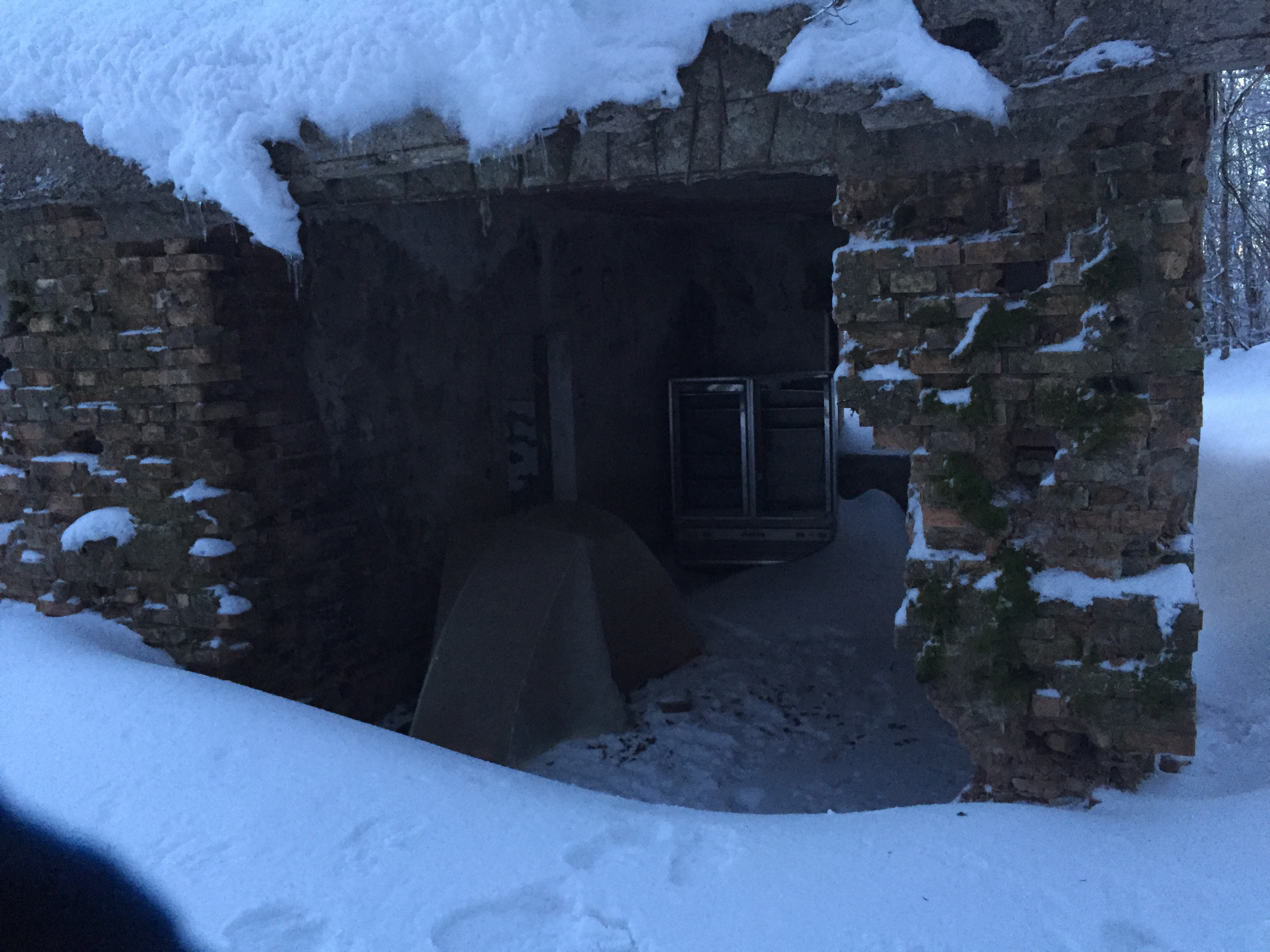 See more photos from my adventure at www.instagram.com/jaredturtlechip