Today I started exactly where I left yesterday: with no backpack in Königstein. The trail started out with a climb to the fortress Königstein. Standing in front of it I decided to go in and have a look. I disguised myself as a tourist, payed the entrance fee and went inside. It is well worth the money. I don’t want to go to much into details of the fortress, but if you are interested, please check it out here, here or here.

I walked around for maybe an hour and a half before I decided to go back on trail. It was a beautiful day, sunny but not too warm. I walked through fields and meadows, past farms and walked through the woods, always in a constant and pleasant up and down.  Only going uphill Rauenstein was a little exhausting due to it‘s many stairs and ladders. The view on top paid off the effort though. From there on it was mostly downhill to the small town of Obervogelgesang where I enjoyed a refreshing drink before I headed towards the end of this trail in the old centre of Pirna.

And that‘s how this story ends.

As planned I hiked without my backpack today and after getting back to Schmilka by train I first was looking for breakfast. I was a little miserable today, maybe because of the weather-change, it cooled down to just a little of 10 degrees, it was raining and during the day I should even experience some hail. Anyways I was miserable and I didn’t like it. I was surprised that within 6 days of hiking I come across so many things, ups and downs. After breakfast I cheered up a bit and after realizing (again) that downs belong to ups like the night to the day I slowly found my joy, my pace and, once in a while, my flow. Yes, all of this is life and that’s how livin’ is done, too!

Todays route automatically brought me actoss several stunning outlooks. Getting up there often was almost easy rock-climbing, use of both hands walking carefully between narrow boulders was necessary. Many, many stairs and ladders had to be taken today and even though I didn’t carry a heavy load today I sure was happy to finally reach Königstein.

Care for statistics? Find them here.

The picture of the day is the Nadelöhr of the Pfaffenstein; width is maybe 1 mtr, height maybe 2 mtrs at the most. I really don’t know why they call this Nadelöhr (needle eye or bottleneck) as there are arrower sections… 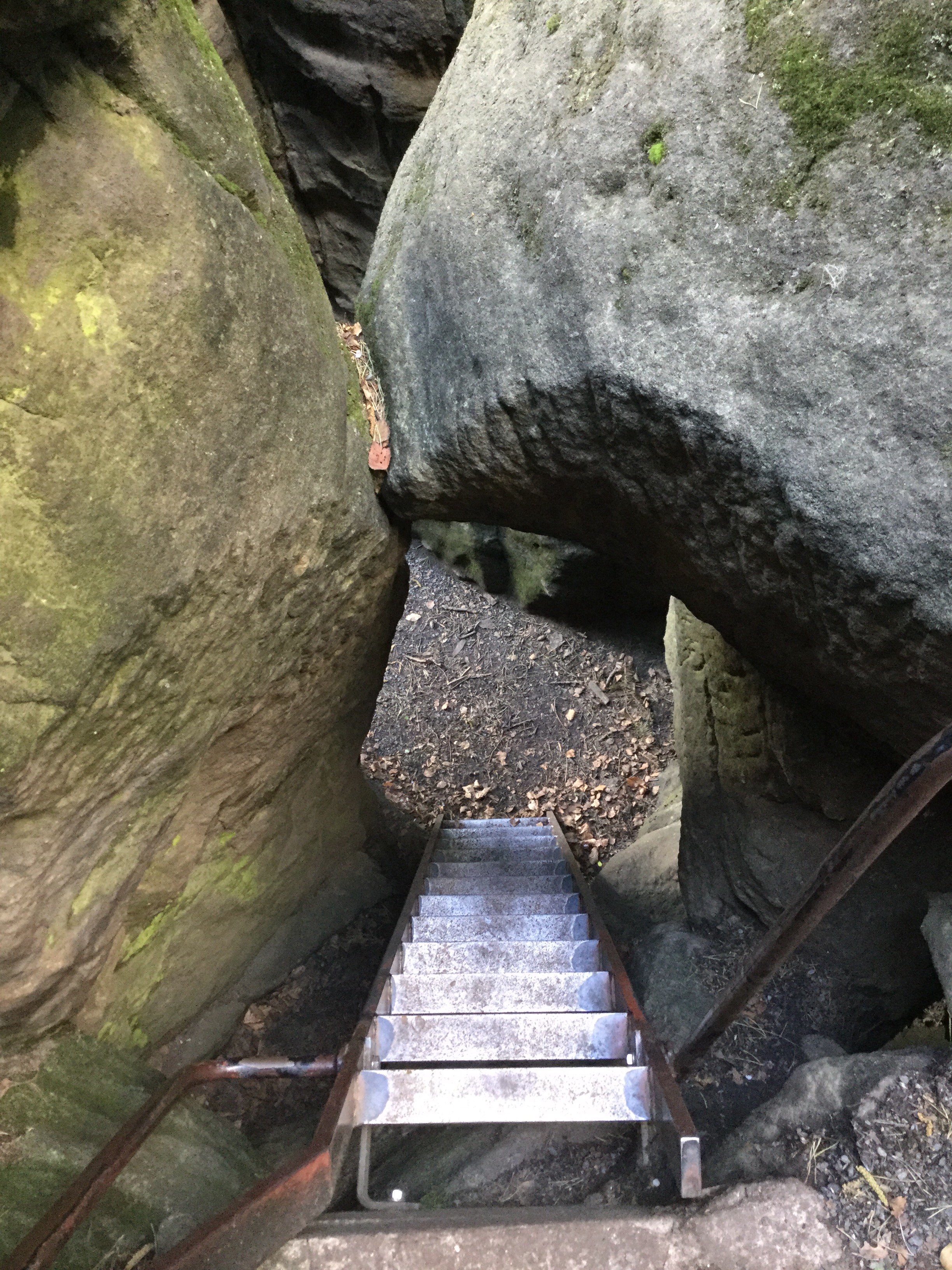 I couldn’t decide on one only…

The Neumannmühle offers a b&b, which I took a chance of. It was worth it and after a good breakfast I left for a short(er) hike; one can consider it almost a “nero” (a near zero distance day). Short it was only in km, long it was elevation gain and loss and rich it was because of the many beautiful views I saw.

I walked all by myself all day and I finally had the feeling, at least sometimes, of getting back into “the flow”. I turned off my head once in a while and just strolled along. This nonchalance gave me the possibility to take some side-trails to various outlook-points. Where they worth it? Yes indeed, I must say.

As I got to Schmilka I decided to take the train back to Pirna and pitch my tent at the community-campground. Tomorrow I’m not taking my stuff with me, I leave it at the campground, there’s no need in carrying it along on the left side of the Elbe as I will pass by train stations every now and then and can go back to the campground.

Enough talk, check out the statistics.

And here’s the picture of the day. What you see is the view from the Kipphornaussicht. On the left you find the Elbe and on the right the Elbsandsteingebirge, which I have been hiking for the last 5 days. 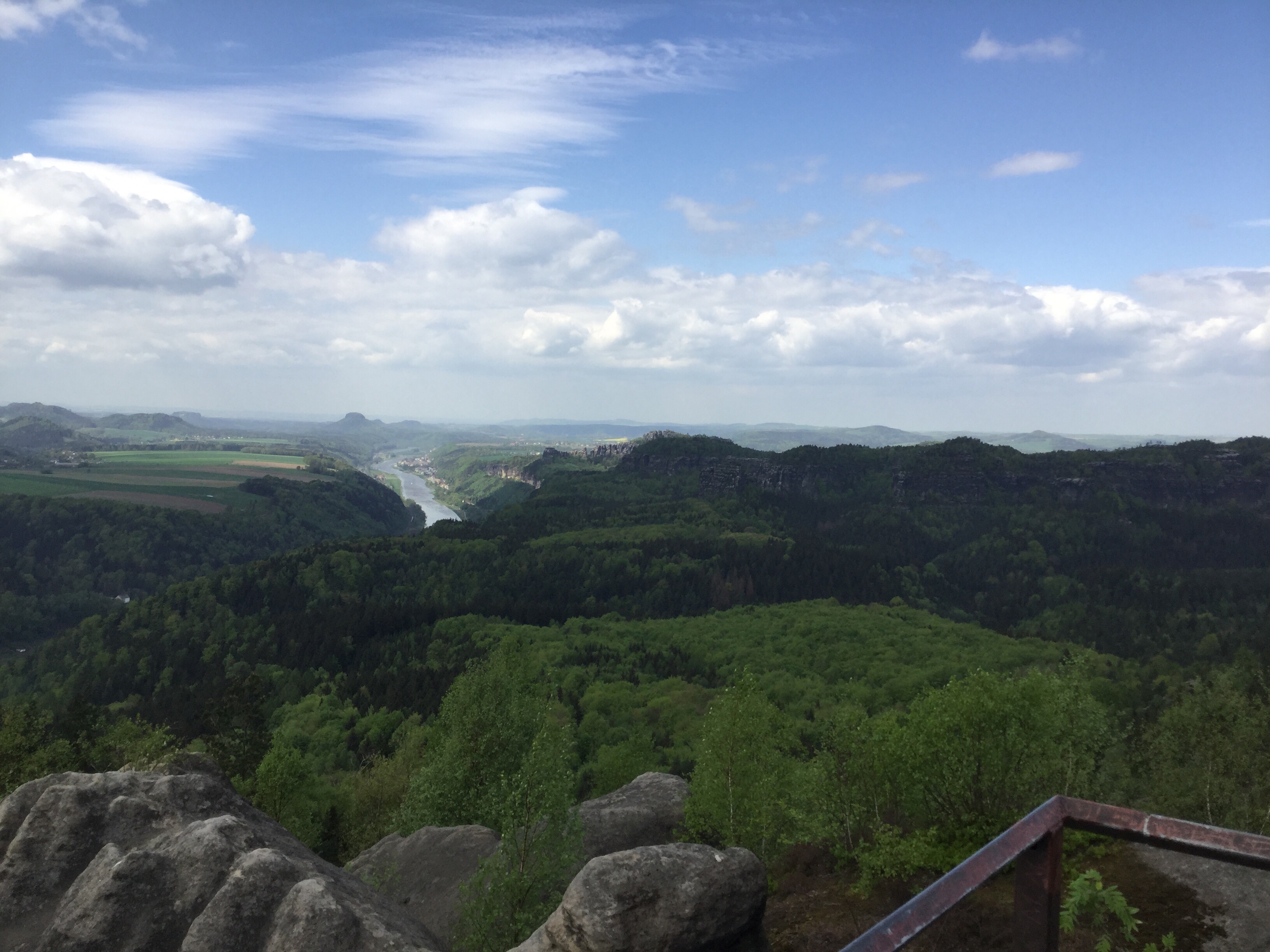 Temperature cooled down a little bit after raining yesterday afternoon and night, what a pleasure.

I met the hiker-group again, twice. But that’s about it. I was all by myself today, what a pleasure.

Scenery is really beautiful as always, what a pleasure.

Enjoy the picture of the day. 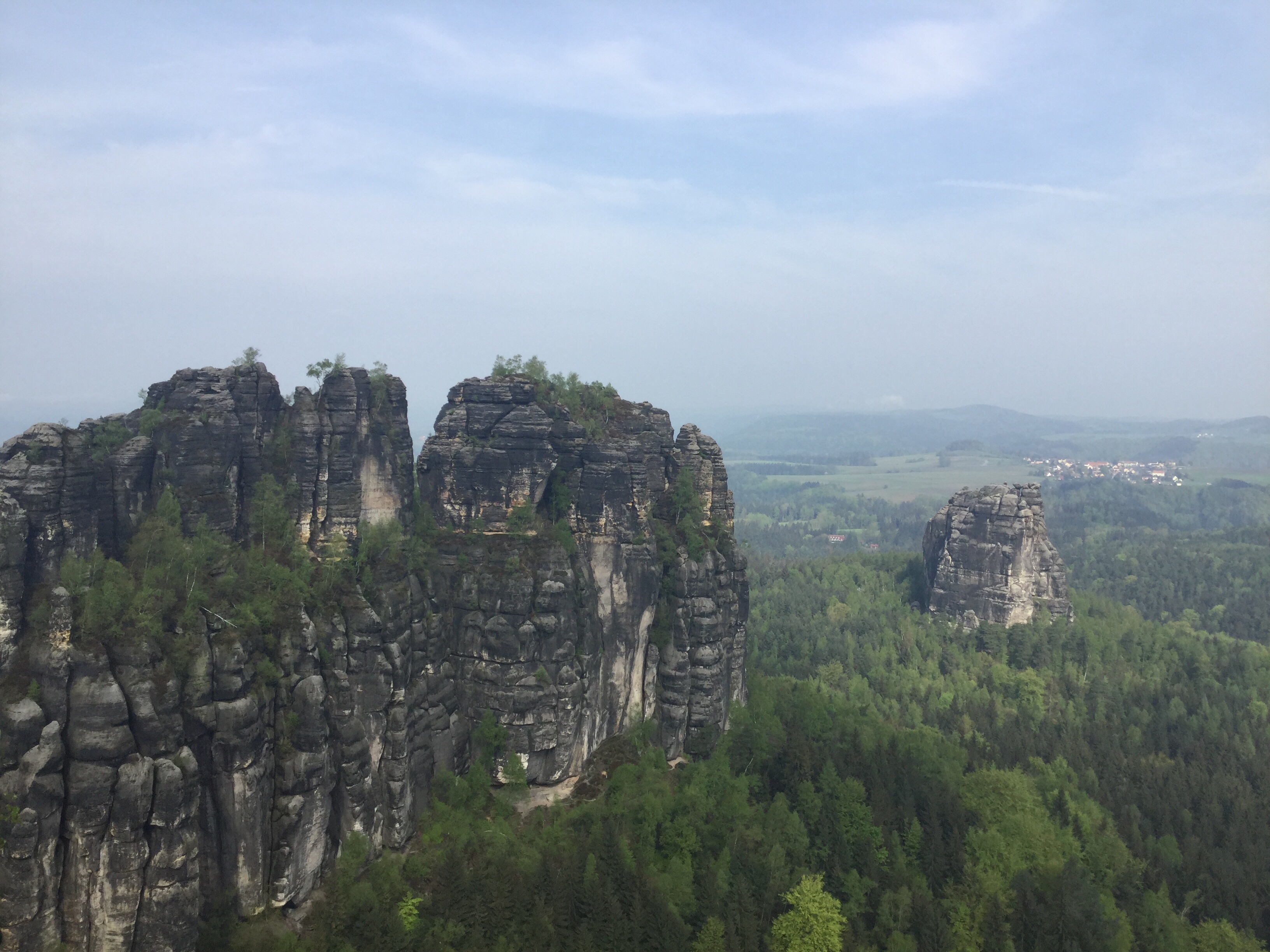 Today I met a hiking-group of 3, age above 70. We met early this morning, split and met later in the day again. We walked together for a while. They told me about their hiking-experiences and expeditions they have taken. To the arctic circle and beyond, South America, New Zealand, North America. „Now“, the oldest person tells me, „as I have a knee- and a hip-replacement I wanna take it easier.“

„What’s life worth when you work all life to chase materialism?“ they asked the rhetorical question, no answer needed.

It felt good to have older folks tell me how livin‘ is done!

Here you find the statistics for today‘s walk:

And here‘s the picture of the day: 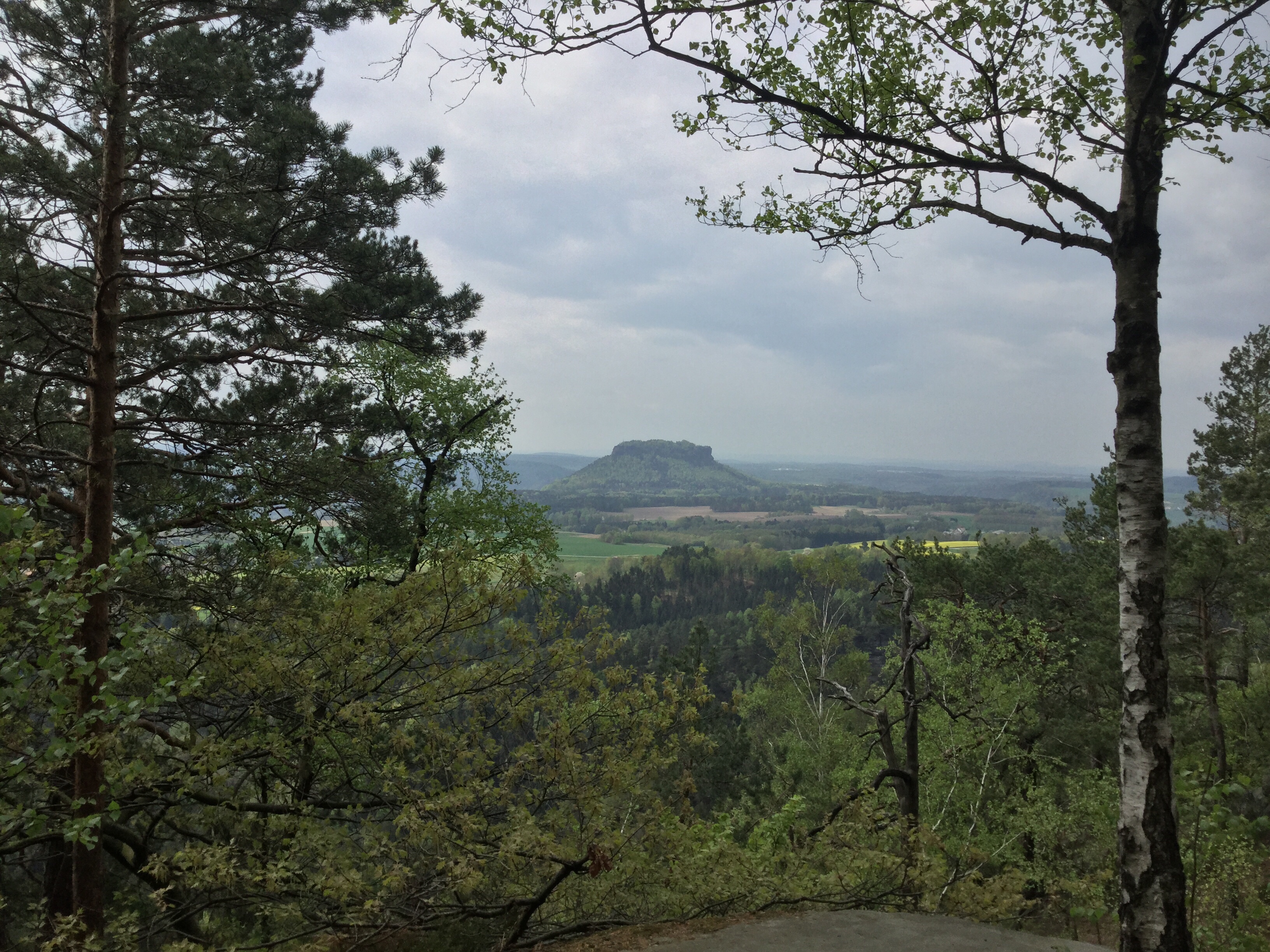 „What a day!“ would be my most probable answer if I were asked how my day was. And that‘s it, I most likely wouldn‘t say much more about it. But I decided to write a blog and therefore I give you a few more details. Plain hard-facts first:

Well, that doesn‘t sound too interesting, so here are the soft-facts. This morning, right before start I met this guy on the camp-ground; we chatted a little bit about this and that, where I‘m from and where I‘m heading. To my words of today‘s destination he adviced me to take a little detour in order to be rewarded for some magnificent views and no tourists, but it can be dangerous he said. I promised him to look out for the detour and not to take unnecessary risks. It was only 3 km into today’s hike and when I found it I decided to go for it because, well you know, that’s how livin‘ is done. The first 15 min. where more or less steep downhill but doable. I came to a plateau, where I found a few rock-climbers with their gear enjoying themselves conquering the rocks around us. And I enjoyed the beautiful views I came to experience. At that point I should have turned around and go back to the trail but I decided to follow the narrow path alongside the rocks going uphill to my left and steep going downhill on my right. Sometimes I had less than 30 cm of width before a drop of I don‘t know because I didn‘t dare to look. I had to hold myself close to the rocks on my left and my heavy backpack of 16 kgs, I know it‘s actually too heavy but I‘m not going to discuss that now, always trying to pull my away wasn‘t much help at all. As long as I could see marks of previous people being here I felt save, I thought. I crossed rocks, where I thought „Oh, one way jumps“ as I jumped and climbed downhill. After about 20 minutes of this adventure I saw this sign saying something like „No trespassing! Danger! Falling rocks!“ As I just recently played all three parts of Batman on my PS4 I decided to keep on going because, well you know „I‘m Batman!“ (imagine that with a dark, deep voice). Another 10 minutes later I was trapped. (Now imagine Batman with a soft, whiny, mimimi-voice). A wall in front of me, a wall to my right, a scary drop on the left and my backpack felt heavier than ever. I couldn‘t go any further. Slowly I turned around trying to find my way back. But that wasn‘t easy at all. Not only was it hard to see which way I came but also it was hard, sometimes not doable to take the same way back. I got a little lost…

Now to make a long story short, I did find back to the trail. I don‘t know how long it took me as I had to focus on my steps and keeping my nerves together. Once I was back on trail I was already pretty exhausted and I was only 3 km into today‘s hike. After a little break I kept on going. I passed the Bastei (do some research of it on the internet for yourself!) and enjoyed some more magnificent views of the Sächsischen Schweiz and the Elbsandsteingebirge. I visited old ruins of a castle build around year 1320 into those mountains. As you can imagine there were tons of tourists driving up their with their cars, smelling all nice and being all clean – I wasn‘t. I left this part behind me and all I got was steep uphill, steep downhill.

After a strenous, nerve-wrecking but beautiful day I finally arrived in Hohnstein. I checked in at a campground, took a shower and had dinner. For the rest of this trip I stay on trail because that‘s how longer livin‘ is done! 🙂

As I sit here and try to think about what to write, it comes to my mind that I don’t want to write everyday “Oh, how beautiful!” or something similar. But what else is left to write when I do what I really enjoy? I just like being outside and nature in total and in specific is a beautiful masterpiece of design. I always fall into awe by exploring the plain beauty of this planet we call earth and we continously destroy recklessly day by day. But, on such a beautiful day I don’t want to sound pessimistic.

I woke up this morning and decided to stay another night at the community campground in Pirna. Nevertheless I wanted to do at least a little hiking. So I did, 18 km, not much but it’s a start. And I have another 7 days to spend so why not take it easy?! It’s around 27 degrees Celsius (around 80 Fahrenheit) and the area and the people around here are really nice. I met a guy today on the trail next to a field of canola; we chatted a bit and ate some fresh picked canola right off the field. We talked about the birds singing, the fresh smell of the air and the beauty of the landscape. With nothing on my mind I continued my way through the wild forest, open fields and alongside the Elbe river and finished in Stadt Wehlen right at the Elbe. I took public transportation back to Pirna and tomorrow is another day of hiking in the beautiful area Elbsandsteingebirge in the Sächsischen Schweiz.

Now, sitting on a bench at the campground, looking back at today I start to realize again: That’s how livin’ is done! 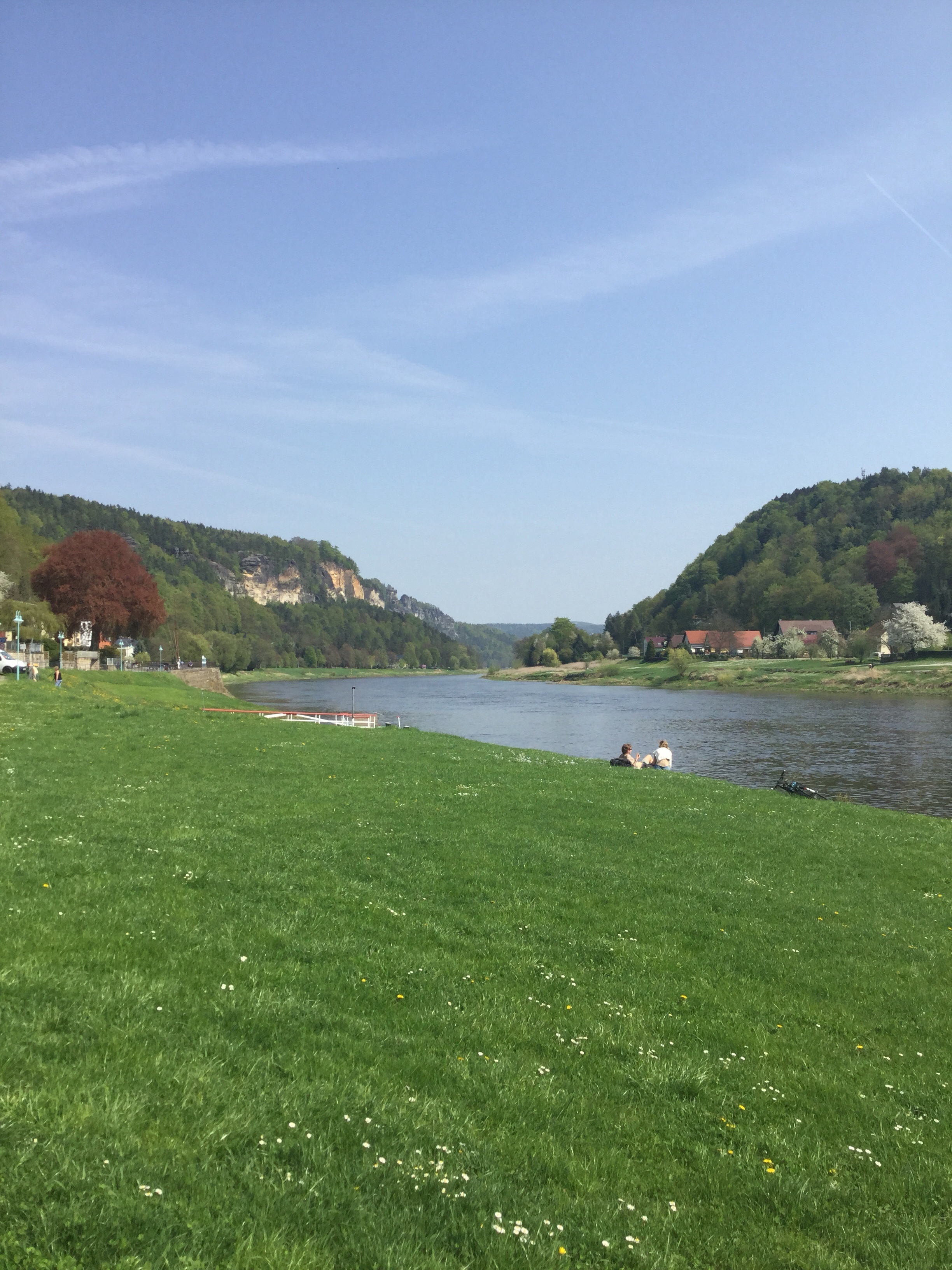 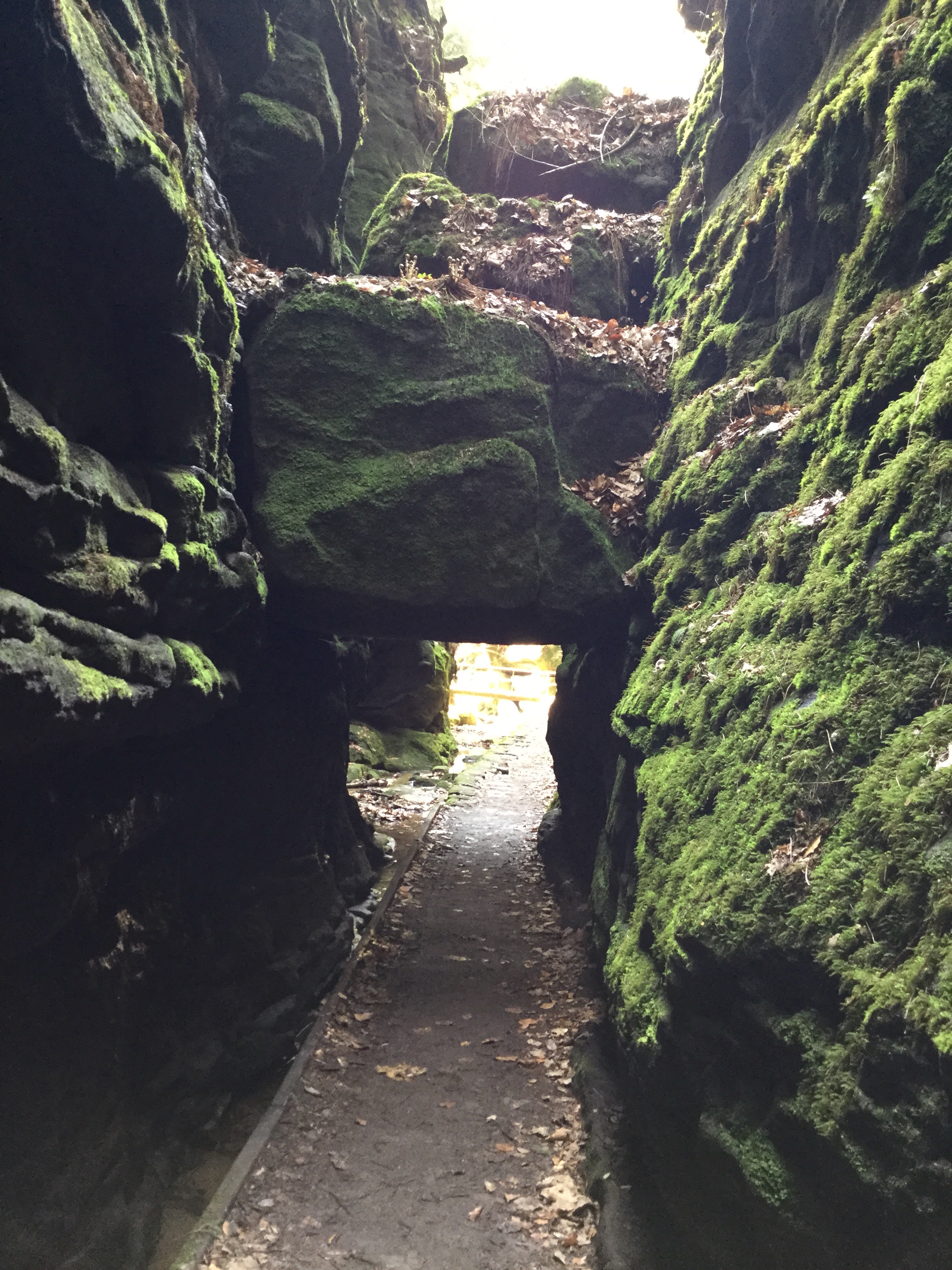 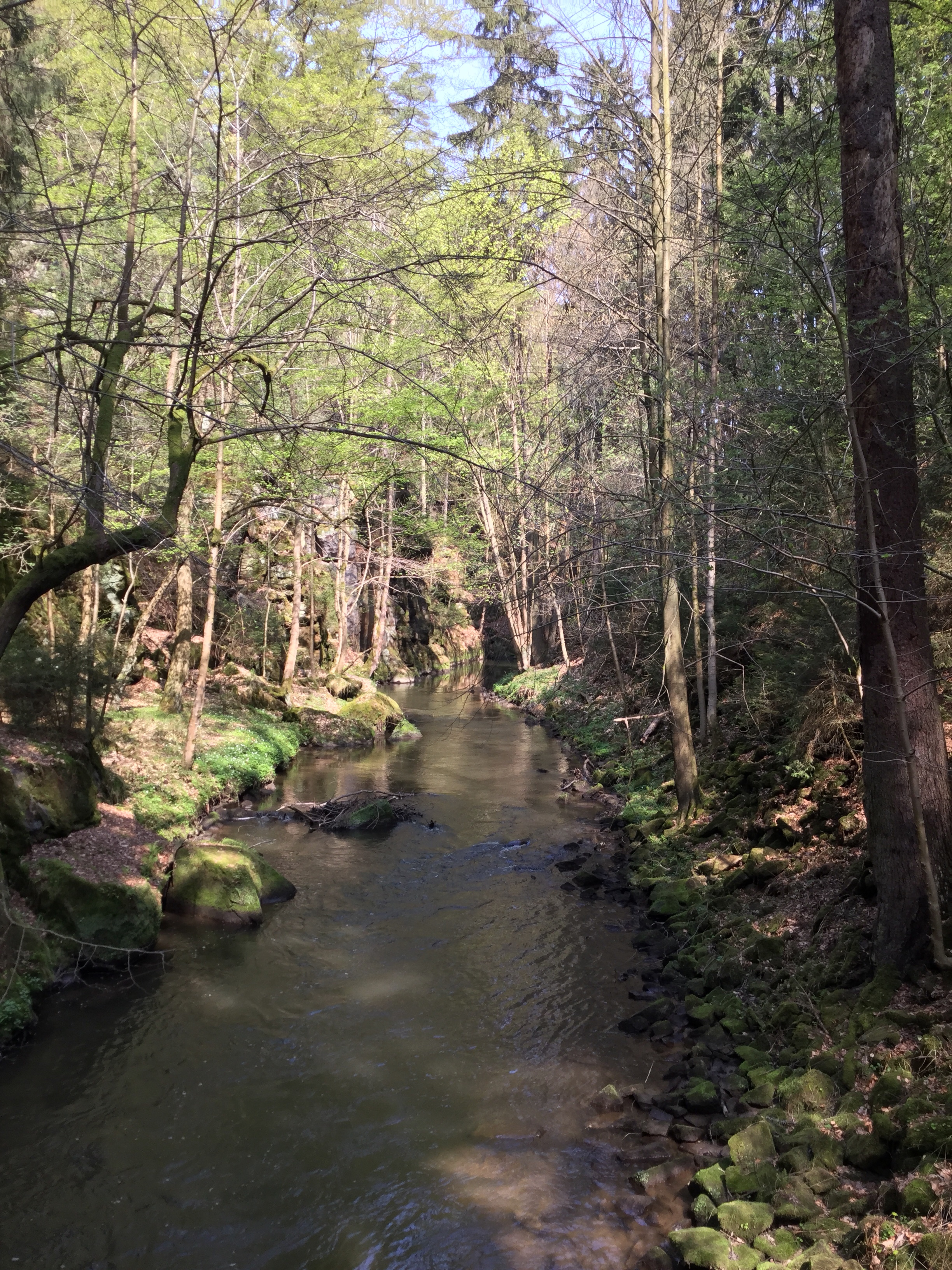 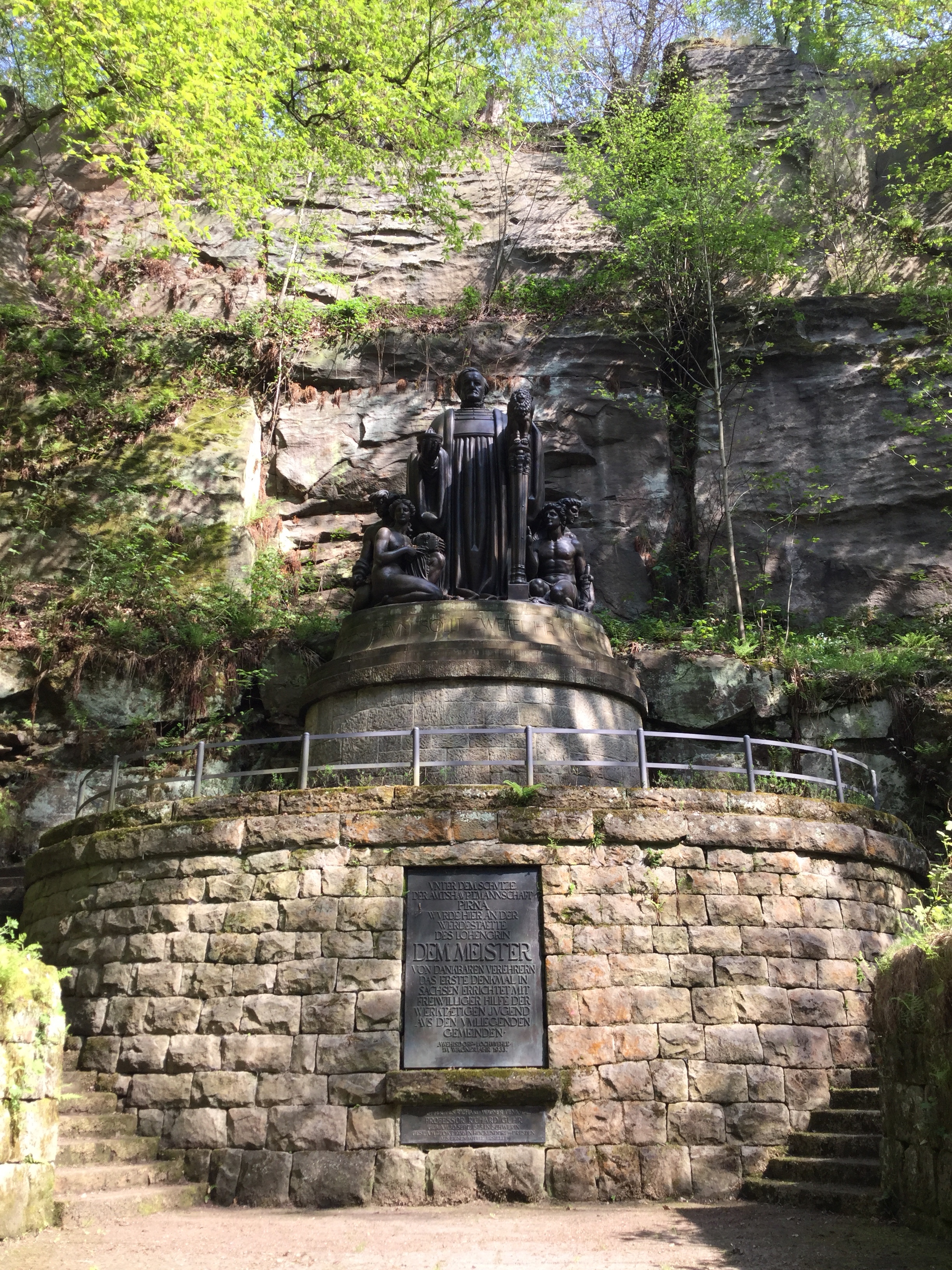 I decided to go on a little, fun and beautiful hike, the Malerweg (The Painters’ Way) in the area of the Elbsandsteingebirge (Elbe Sandstone Mountains), which is part of the Sächsischen Schweiz (Saxon Switzerland). It’s about 112 km (68 mi.) long and it’s designed as a round-trip starting and ending in the small town of Pirna.

Yesterday was my day of arrival, I chose to take the train and to everyone’s surprise it was a pleasant trip, no delays and all connections went smoothely. I checked in at the community campground in Pirna for € 12,50 a night. I was surprised on how nice of a campground it is. It features a small lake for swimming and all of the infrastructure including sanitary facilities are really well maintained and clean. I wasn’t much into admiring those little things as I was really tired of the trip and coming out of a night-shift at work; there wasn’t too much sleep possible on the train.

I put up my tent, enjoyed the sunset and fell asleep pretty early. Tomorrow is a new day!

Picture of the day: 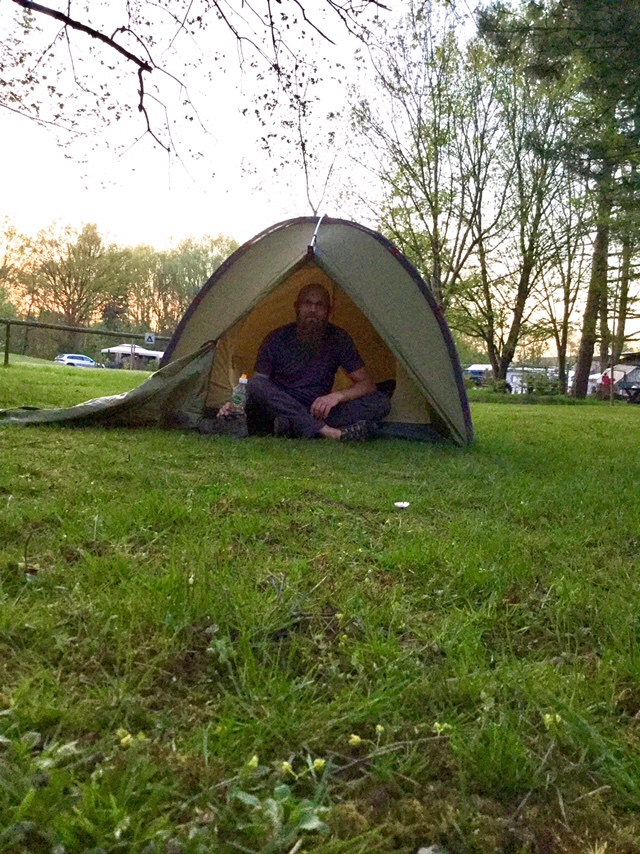 Home is where my tent is!