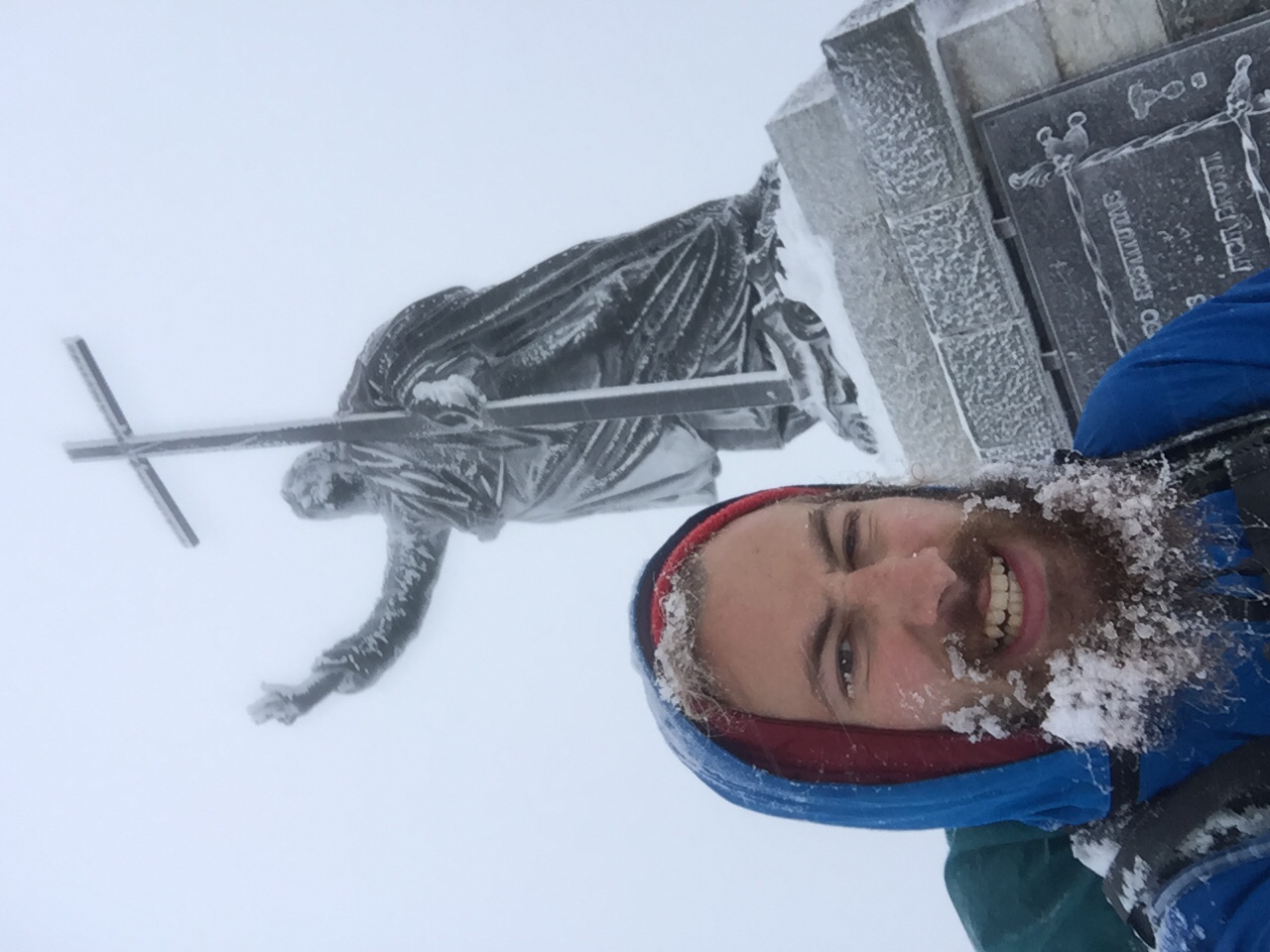 I was able to get a bit of sleep last night, but not much. I looked at my phone at 5:15 am and thought maybe it was time to get going. I wanted to get off this cold mountain and continue on my way. I heard thunder and saw lighting at about 5:30 and considered whether I should just stay in my tent or not. But that was the only time and I felt it was best to find my way down. The worst part of days like this is usually getting out of my warm sleeping bag and putting on cold clothing. My socks and boots were frozen stiff and so were the bottoms of my pants. Starting out the day with cold toes is no fun, but the best way to warm up is to move! It snowed last night so my tent was pretty wet as well. The fresh snow also made it a bit harder to walk.

The going was slow but steady, and soon I reached the short trail that would lead me to the summit of Montalto with a climb of close to a kilometer. I had been considering whether or not I wanted to go to the actual peak because it was out of my way. I knew it would take some time with the deep snow, but dang, it’s hard to pass up when you’re this close! So I made up my mind at the last minute that I would go for it! The trail was hard to follow, but I eventually found my way to the top, where a large statue of Jesus was waiting for me. Apparently back in the day they put these on many of the higher peaks in Italy. Up on this snow-covered peak my sense of aloneness really hit. I wondered when the last time someone else had been up here. I also realized this was the tallest mountain I’d ever climbed on foot! The wind and snow hit me hard so I didn’t stay for long. On the way down the snow was extra deep at times, and after a slight struggle to stay on trail I had a somewhat pleasant cruise down.

The trail changed from a path through the forest to an open, rocky area with markings here and there telling me where to go. They were few and far between, so again, I lost the trail and somewhat had to make my own way. Not much of a difference when the actual ‘trail’ is worn about the same, but it’s frustrating because you don’t want to waste energy and time going out of the way or getting lost. It snowed all morning until I got to an elevation low enough for it to be rain. I tried to follow along with the map on my phone, but it was getting wet and didn’t have much battery left. This added to the frustration of losing the trail and descending through wet rocks and thorns. I slipped on a rock and hit my knee on another pretty hard. I realized that it didn’t hurt nearly as bad as I thought it would for how hard I hit it. Maybe I was too cold to feel much. Around 45 minutes later I looked down and noticed that there was blood staining the outside of my pants. I remembered my slip and looked at my knee. There was a decent gash that was actively bleeding, but still didn’t really hurt. It was clean though with the rain and slowed on it’s own so I didn’t do anything with it. 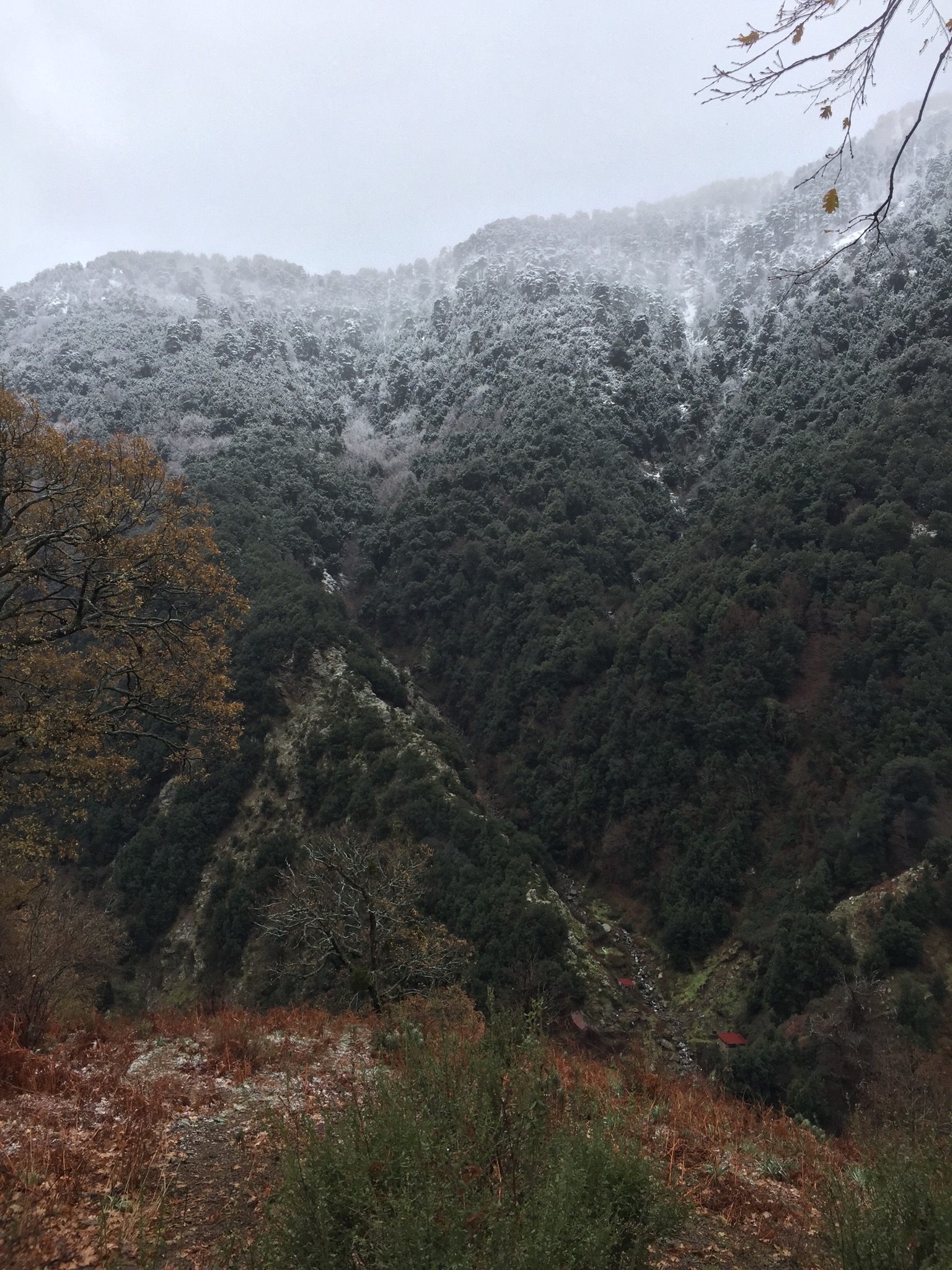 Up until around this point I had been recording my trek with the app AllTrails. I have an external battery that’s good for around four full charges, so I wasn’t too concerned with how quickly the app drained my battery. But cold and wet weather like this isn’t the best thing for electronics, and my phone also likes to do this cute thing where it just won’t charge when plugged in. So at the convenient time of being in the middle of a National Park by myself in a foreign country without a trail map, getting colder and colder due to the rain, my phone decided to be stubborn and not charge. So now it was down to 1%. Fortunately, a strange thing it also does is charge just enough to bring my phone back to life after it dies, or just for a minute or so, keeping my phone alive at 1%. It’s weird, but at least I had this going for me. I stopped recording my activity, but did keep the map open in order to see which way to go.

I found my way down and wandered through the town of Polsi. From the signs in town and also on a map, I learned this town is one of religious and historical significance. Tens of thousands of people make a pilgrimage there every year to visit the church and celebrate Our Lady of the Mountains. This all sounds pretty neat, but I saw not a single person as I made my way through! It almost seemed like an abandoned place. Maybe it was the weather or maybe it was siesta time. I definitely want to come back to interesting places like this in the future, but today I had distance to make and I was cold, so I was happy that I had some climbing up next to warm me up.

I turned onto a trail that I was supposed to stay on until reaching San Luca. This trail didn’t have the most obvious markings, but I basically stayed on a ridge at a pretty consistent elevation. Then the trail led me down next to a river, along which I would have some of my least favorite hiking experiences I’ve ever had. The trail corridor got thinner and thinner, with different kinds of thorns impeding on the trail. After getting lost and finding my way again, I crossed the small river. At some point I slipped a bit and one of my water bottles fell out of the side of my pack and into the water. I was able to retrieve it before the river swept it away.

After continuing on for a couple minutes I stopped for a short break. It was then that I realized I had lost a pair of socks that I had tucked next to my water bottle. Definitely not the smartest place to store them, but they were soaking wet and I thought I would let them dry over time on the outside without getting other things wet inside. I left my pack and retraced my steps, making my way back to where I had slipped crossing the river, hoping to find the socks but knowing it was a long shot. No luck. Later on I discovered I also lost a glove that was tucked on the other side. Simple things to replace, but the main reason I’m sad about them is because the socks were a gift from my friend Kelly, and the gloves were borrowed from my buddy Mason for a run (years ago…I really had the intention of giving them back). Sorry Kelly and Mason!

My mood got worse and worse as I followed these poorly marked trails. They were pig trails, so they split off from each other often with no indication of which was the trail meant for me. At times the thorns encroached so much that I had to pretty much crawl underneath them like a pig would. I got scratched all over my hands and my gear took damage as well. At times the hat was pulled straight from my head and rain cover pulled from my backpack, left dangling behind me. I lost my way and attempted to bushwhack, but the thorns stopped me and made me turn back. I went back and forth, unable to find where I was supposed to go, all the while being scratched by thorns. The trails seemed to lead nowhere. At this point I was yelling to some unknown trail master, begging them to tell me where I was to go. Pleading for a decent trail. Giving them my very negative feedback on their trail. (A trail that runs 6000 km through the whole country. A trail in the National Park I was currently in!) I very nearly shed tears of frustration. I even startled some pigs, sending them running off after thrashing about in the bushes. This reminded me of scenes from Lord of the Flies and succeeded in taking my mind off the annoyance for a moment.

I was on the side of the river, which consisted of a huge river bed of rocks with a stream running through the middle. It gave me the impression that it was once a gigantic river. It was basically a huge gorge in a valley between the mountains. I made up my mind to forget trying to follow the trail completely and to walk along the river bed instead. All I had to do was follow it straight into San Luca. So I scrambled down and did just that. It was fun seeing the dot that was my location on my phone be in the middle of the water. Although rocky and sandy, I moved much more quickly and consistently on this section. I got my confidence back and forgot how upset I had been recently. Sometimes a quick change in environment will improve our lot immensely. I didn’t put the thorns there, but it was my decision to keep following the paths that led me through them. I certainly played a role in my own situation and stopped seeing the big picture.

It started getting dark, so I stopped at the next sandy spot close to the river and pitched my tent. I couldn’t be mad with such a beautiful place to camp, with the rush of water next to me and the lower elevation with no rain giving me hope for a warm night of sleep. That’s when I discovered that basically everything in my pack was wet. I couldn’t catch a break! My backpack and almost all of my clothes were soaked. I focused so much on forward progress and staying warm earlier today that I neglected to pay attention to my rain cover and other details. So, needless to say, this wasn’t the best night of sleep either. But at least I wasn’t up at 1800 m with wet gear!

I didn’t have too much water left and I didn’t feel like getting out of my tent to pump water from the river, so for dinner tonight I had dry oats that I’d been carrying since Catania (shout-out to people who leave food at hostels), with honey, Nutella, and peanut butter, all stirred together with a splash of water. It was actually freakin delicious. Things aren’t so bad with sustenance like that to keep you going. 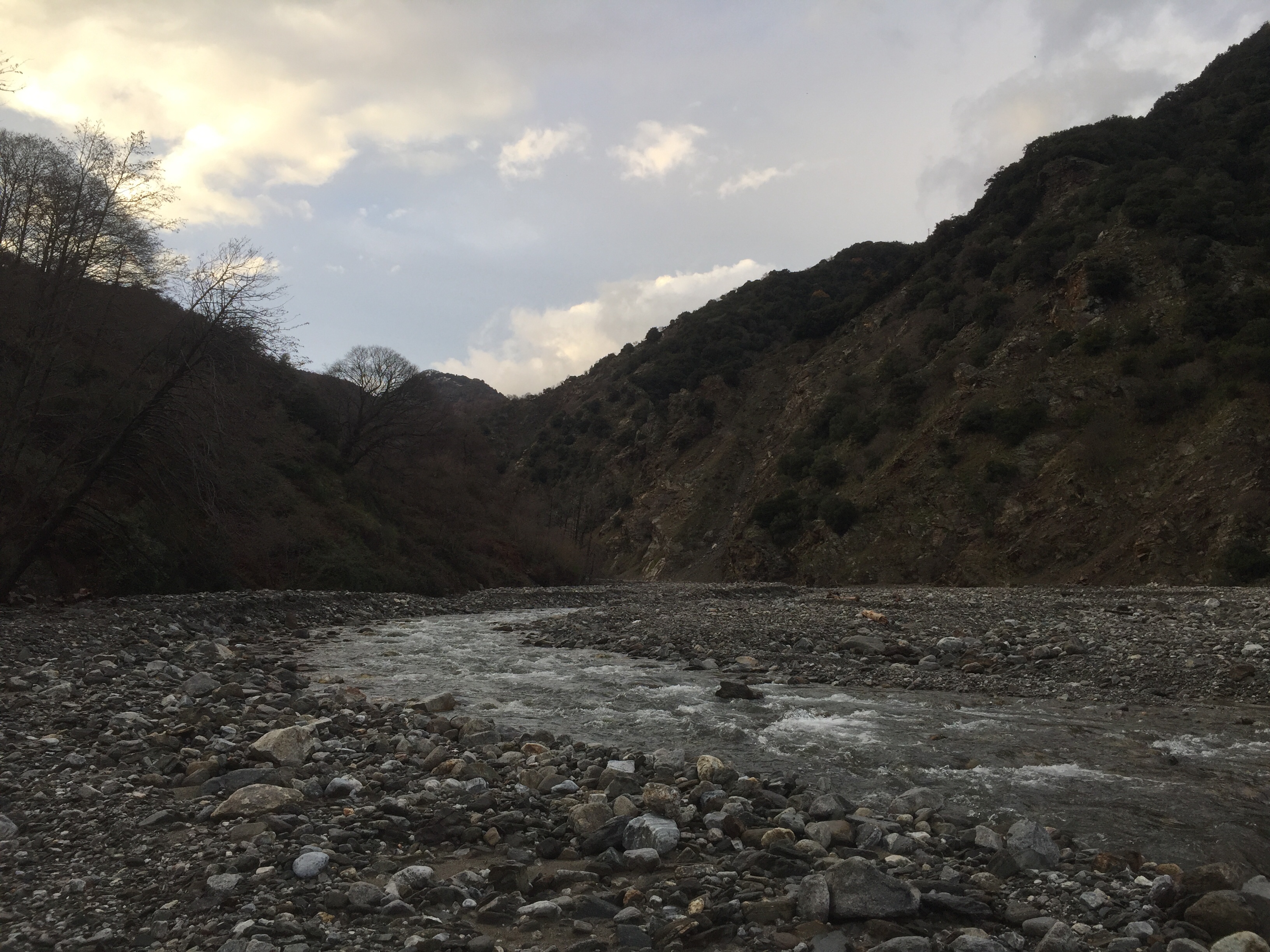