It is what it is!

Maybe it’s not the best idea to start writing about the PCT with the thought of quitting. Maybe it’s more fun to write about the stunning beauty of nature. Or trail-angels. Or fellow hikers I’ve met. Or maybe I should write about my planning-procedure or gear. But maybe not! Maybe I should start with the time where I almost quit, because, well, I only ALMOST quit. And because of ALMOST it raises the question on “Why didn’t I quit?”. The answer to this is a story of beautiful, kind and nice people who where there just at the right time. They came to me like angels telling me the story that everything is taken care of, when one is on the right track. Here is my remembrance to them.

About two weeks later I came to Washington and I called up Sarah and Jeff. They came and picked me up and they, too, let me stay in their home for two, or was it three?, nights. We again had nice talks about cooking and food and politics, we went for a walk, cooked together and shared stories together. After they brought me back to the trail back in Oregon I crossed the Bridge of Gods leaving Oregon for good and facing Washington state for my last 800 km (500 mi.) of my trip on the PCT.

I would have not finished the PCT at the Canadian border if I wouldn’t have met Sarah and Jeff, Jane and Jim. If they wouldn’t have opened their hearts and homes for me, I would have just quit somewhere in Oregon. It’s because of them I can tell stories of how I finished the PCT and it’s because of them that I can think about going on future hikes. I am forever thankful for them being part of this adventure and, because of this, part of my life.
Please, Lord, bless them always! 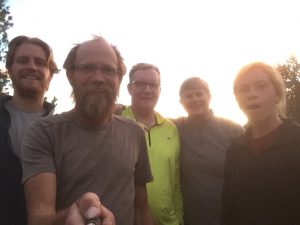